Lost on the battlefield, Russian President Vladimir Putin resorted to implicit threats to use nuclear weapons in the war of his choice in Ukraine. The United States, the Group of Seven (G7) countries, NATO and the European Union (EU) reacted to his tightrope approach by reaffirming their support for Ukraine and its territorial integrity.

Additionally, the United States and others have sent public (and, it seems, private) messages about the grave consequences Russia would face if it did indeed use any type of nuclear weapon against Ukraine. . Although unlikely, the chances of Russia using nuclear weapons in its war against Ukraine are not negligible. After all, Putin surprised many (but not the US government) when he launched his February 24 offensive against Ukraine.

Explaining to the Russians the consequences of any nuclear use is a good idea. These conversations must necessarily focus on military options as the most effective deterrent, but must not stop there. Even though Putin has eschewed the traditional rational behavior of actors in the political and economic sphere with his unprovoked and gruesome invasion of Ukraine, the West should still threaten harsh political and economic action in response to any Russian nuclear use. . All these measures should be prepared for rapid application by the G7 and coordinated at least to some extent with other key countries, including China. Russia’s use of nuclear weapons against Ukraine would require a rapid and near-immediate response from a broad coalition of concerned states beyond those nations currently aligned with the West.

Imposing a complete economic, financial and commercial embargo. Turning Russia into Iran or North Korea, economically, should be the moral and logical starting point for any Russian use of a nuclear weapon in Ukraine. So far, G7 and EU countries have imposed extraordinary sanctions following Russia’s invasion of Ukraine, but for the most part they have also been measured in their moves to avoid negative fallout. on the global economy. Any use of nuclear weapons by Putin in Ukraine must eviscerate any idea of ​​measured escalation. Morally, this would place Russia’s behavior far beyond the atrocities committed by similarly embargoed nations like Iran, Syria, and even North Korea. Logically, it would also be incongruous for the West to hope that Russia under Putin could be a reliable participant in an international economic order that is based on mutually agreed rules.

Allowances may need to be made for an extended shutdown of certain trade sectors (energy and possibly some specified metals) and longer exemptions for continued food and medical trade, including Russian exports of grain and fertilizer. There should be exclusions for humanitarian contingencies and measures to support the Russian people, such as allowing apps and communication devices to allow embattled Russian dissidents and human rights activists to communicate with the world. outside. However, the basic assumption for the aftermath of Russia’s use of nuclear weapons against Ukraine should be that of a full embargo: all Russian companies would be subject to full blocking sanctions with exceptions available . Foreign ownership of Russian oligarchs or Russian state enterprises should be subject to nationalization.

Enforcement would include broad use of secondary sanctions against any foreign person or nation, including China, that violates those sanctions. This would include the prompt imposition of sanctions on any bank, insurance company, logistics provider or other financial or non-financial entity trading with Russia or facilitating prohibited trade. Given Russia’s use of practices aimed at concealing investments and their ownership, the US, EU, UK and G7 countries should consider regulatory (preferred) or legislative measures imposing transparency and disclosure of any Russian investment or other significant property, whether in business, real estate, art or financial instruments. The Russian state is familiar with money laundering and would almost certainly look more like a criminal enterprise, like North Korea, than a normal government, if subject to broad economic sanctions.

Sanctions at this level will have a significant negative impact on the global economy. However, they are unlikely to be much more economically destabilizing than the use of a nuclear weapon on European soil. Western nations must make it clear to Putin and his entourage that they are ready to bear the economic consequences.

Seize Russian state property. A few days after Putin’s February 24 attack on Ukraine, the G7 countries blocked more than three hundred billion dollars of Russian foreign exchange reserves held in their countries. However, this effective freezing does not allow the use of these funds for any purpose whatsoever. We have noted elsewhere that there is a widespread desire to use these funds for the reconstruction of Ukraine, given both Russia’s responsibility for the war and the problem of asking taxpayers in G7 countries to pay to rebuild Ukraine while sitting on large amounts of Russian public funds.

However, this leads to enormous legal complications. Russian nuclear use would make taking these assets for use in Ukraine, including post-nuclear attack reconstruction, an immediate objective. Arguments about precedent should and probably should give way to the categorical imperative to act against the use of nuclear weapons.

Withdraw Russia from international organizations. Although Russia was expelled from the G8 – making it the G7 – in 2014, it remains a party to a number of international organisations. If Russia were to use a nuclear weapon in Ukraine, its participation in other international organizations would have to be reconsidered. The first place to start reducing Moscow’s involvement should be in economy-focused organizations, including the Group of Twenty (G20) and international financial institutions such as the World Bank and International Monetary Fund (IMF), and maybe even the World Trade Organization. Expelling or restricting membership from any of these bodies would be unprecedented and, interestingly, not explicitly in violation of their existing statutes. Expelling Russia, therefore, would involve a complex political and bureaucratic undertaking, and would require substantial support from the leading members of each institution; the IMF would require that at least 85% of voting members agree to expel Russia, for example. Political support for such drastic action could be greater after a Russian nuclear strike.

There may be good arguments for keeping Russia engaged in international political organizations such as the United Nations and the Organization for Security and Cooperation in Europe, as venues for potentially valuable diplomacy with the Kremlin, even after the crisis. use of nuclear weapons. However, Russia’s membership itself in these groups should be reviewed and reconsidered in light of such a dramatic escalation.

Now is the time to consider and prepare such tough responses, and coordinate them upstream within existing G7 and transatlantic forums. There should be no illusions about the limits to which Putin will go in Ukraine.

The responses planned by the West need not be made public, but could usefully be communicated both to the Russian government and to other strategically important nations that have remained relatively neutral in the current conflict, such as China. , India, Turkey, South Africa and Saudi Arabia.

But that planning shouldn’t stop the United States and its allies from responding to the horrors that Putin is inflicting right now with conventional weapons. They should prepare for the worst while continuing to intensify current efforts at all levels – military, economic and political – to coerce Russia and help Ukraine defend itself and prevail.

Brian O.‘Toole is a Nonresident Senior Fellow at the Atlantic Council‘s Center for Geoeconomics. He is a former senior adviser to the director of the Office of Foreign Assets Control (OFAC) of the United States Department of the Treasury. Follow him on Twitter @brianoftoole. 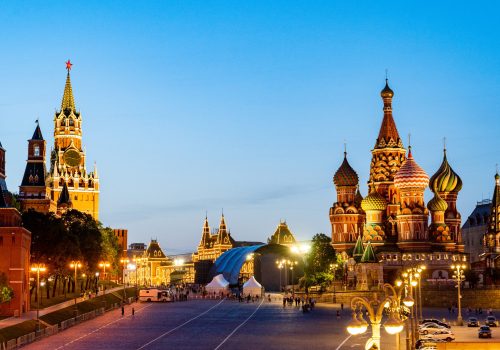